For the 11th time, from November 12 until November 19, the city of Eindhoven will be all about Light Art. An enormous exposition of around 40 national and international light artists in the public space of the city of Eindhoven. The light art projects are all connected along a walking route. From bombastic 3D video mapping on buildings to sky-high artificially created lightning bolts. But also unique, innovative projects showing the latest light techniques. Together, these new light art projects ‘Made in Eindhoven’ are called GLOW Next. In contrast to recent years, all projects will be integrated along one GLOW route. This makes the event more accessible to the public. GLOW Eindhoven can be visited free of charge. Last year, over 730.000 people visited GLOW.

GLOW highlights the strong connection between the city of Eindhoven and Light. In 1870, the match industry got to a considerable growth in the city and in1891, Philips established a light bulb factory here. Nowadays more than ever, Eindhoven has become a pioneering city and natural incubator for talents in the field of creativity and technology. By offering specialised educations and institutions, the city has an enormous knowledge potential. This is clearly visible in the constant development of high-quality technology and cutting-edge design. Amongst others, engineers, designers, scientists and artists work together to create innovative light concepts, – techniques and insights. These light concepts together form GLOWNext, a special platform for innovative, new projects. The last couple of years, GLOWNext was exhibited at Strijp-S. This year, GLOWNext will be integrated into the GLOW route.

The GLOW route reflects this year’s theme City & Science. GLOW has a route, consisting of a loop of 3.5 kilometres across the University of Technology area and a loop of 4.2 kilometres through the city centre of Eindhoven. The city centre route runs across 18 Septemberplein, Emmasingel, Vestdijk to Stadhuisplein. Then, the route goes into the direction of the Catharina Church, across the Markt, Dommelstraat and heading up to the Dommel tunnel. A large part of the GLOW Next projects will be exhibited at the University of Technology area. This year, the science area’ will be literally be connected to the light art works in the city centre. Light makes technique appeal to the imagination, it becomes truly magical. The route starts and ends at the Eindhoven Brandstore (Tourist Information Office) at Stationsplein near the Central Station.

From November 12th till November 19th 2016, Eindhoven will be all about light art. A large open space exposition of about forty national and international light artists. These light artworks are connected by a walking route consisting of two loops this year. The City-route, which has the colour blue, runs through the city centre of Eindhoven. Here, you encounter the light artworks with gigantic 3D-video mapping on buildings, the children’s light artwork and the interactive swings. Along the Science-route (orange), which runs across the University of Technology site, you can discover unique and innovative projects that are exhibited for the very first time On both routes, you’ll come across food courts with surprising, inspiring concepts which fit the GLOW vibe Pick a route Every route takes approximately 2 to 2.5 hours and it might be practical to make a choice beforehand.

Will it be the blue City-route through the city centre or the orange Science-route across the University campus? Unlike previous years, GLOWNext will be integrated in the main route now, which makes it more accessible to a larger public. At gloweindhoven.nl or in the GLOW App 2016 (to be downloaded at the beginning of November) you’ll find information and images of the light artworks. Extraordinary light artworks At Eindhoven City Hall along the City-route, a 3D film will be projected which will make the building to appear to be moving and coming towards you. The work of art ‘Axioma’ is created by Onionlab, by now one of the public’s favourites. In commemoration of Jheronimus Bosch who died 500 years ago, Catharina Church will be transformed into the marvellous triptych ‘Garden of Earthly Delights’. The Dela building will be embraced and held by 12 metre high, illuminated humanoid figures which seem to have landed from another planet: ‘Fatastic Planet’. 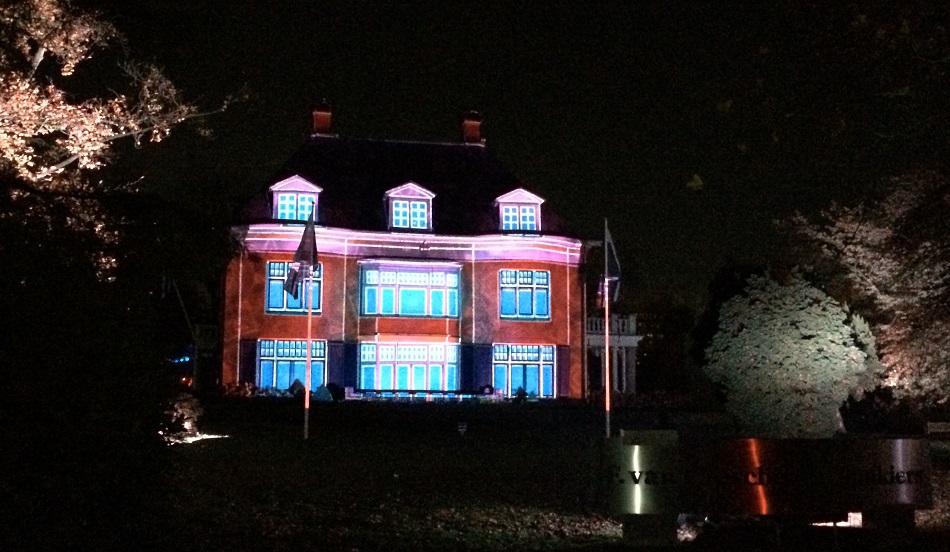 Along the Science-route at the University of Technology site, you will encounter ‘Exploding Wire’, a project which will attempt to break the world record of ‘the longest containable lightning bolt ever’. The enormous ‘LumenUs’ will react to impulses coming from the GLOW audience and is created by Eindhoven students. Unique in this GLOW-year is the special collaboration between the University of Technology of Eindhoven and the Van Abbemuseum, both celebrating their separate anniversaries. To commemorate this, both world-famous institutes decided to connect technology to art in a very special manner. A hologram will hover above the surface of the university pond which is a projected recreation of the Hungarian László Moholy-Nagy’s artwork, called ‘Licht-Raum-Modulator’. This work of art is actually exhibited at the Van Abbemuseum.
GLOW Food Courts This year, you’ll find five food courts along the GLOW Route instead of one GLOW Café. Inspiring and surprising bars & restaurants which fit the GLOW vibe and serve as starting points of the GLOW Route. Last year, we already had a successful try-out at Stadhuisplein with Pop-Up Restaurant LUCE. GLOW can be visited, free of charge and attracted more than 730,000 visitors last year. Because of that success, GLOW will again finish off with a GLOW Run.

The GLOW route is accessible for free.
Tickets are available for guided tours and Specials.